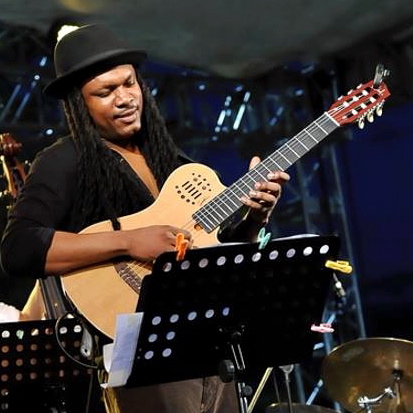 Passionately driven to create good music, arranger and composer Marvin Dolly combines his love for jazz with broad influences from calypso and Brazilian music to create his signature style.

Originally from the beautiful island of Trinidad and Tobago, Marvin started playing the guitar at very young age, studying the classical guitar, and taking part in various music festivals in the Caribbean. Gaining popularity, he began touring extensively throughout the Caribbean, United States, Canada, Europe. Marvin attended the Institute of Contemporary Music Performance in London where he had the opportunity to study with great musicians from around the world including: Barry Langton, Chris Newland, Charlie Griffiths, Amit Chatterjee (Joe Zawinul, Richard Bona, Etienne Mabappe), and Mike Stern (Miles Davis, Blood Sweat and Tears).

Moving back to Trinidad, Marvin was quickly hired by the University of the Southern Caribbean as a guitar tutor, teaching over a hundred students a week and holding master classes to help students to develop their improvisation skills in a live situation. He later migrated to the United States were he works with musicians like Freddie Bryant, Mark Shim, Wessell “Warmdaddy” Anderson, Neal Smith and Jaimeo Brown.

Marvin has an optimistic outlook on life, and feels that every experience is charged with the capacity to transform.  Marvin joined the Bailey’s Cafe teaching artist staff winter 2015.

Your ticket for the: Marvin Dolly