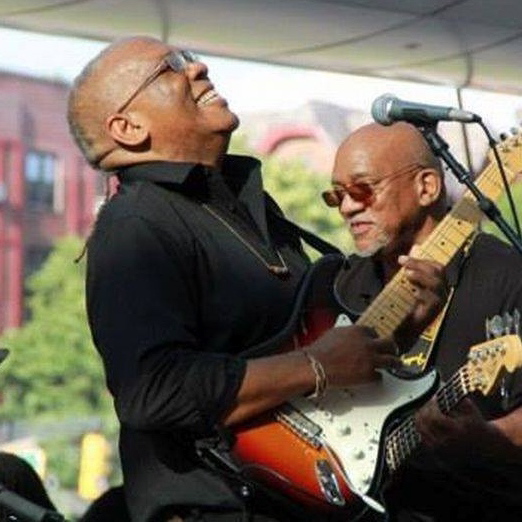 Michael Hill has been a performing musician since 1973. Over the course of his career, he has produced six internationally released albums of his Original New York-Style Blues with his band Michael Hill’s Blues Mob and taken his music to twenty-nine countries around the globe.  Since the release of Bloodlines (1994), Michael has built a distinguished body of work that has drawn worldwide critical and audience acclaim for his dynamic musicianship and vivid storytelling.  Since his start in a band with his three siblings, Michael has gone on to perform and/or record with a wide range of artists including Harry Belafonte, Little Richard, Carla Thomas, B.B. King, Bobby Womack, and Buddy Guy.  One of Michael’s career highlights is his tenure as a guitarist and vocalist (1985 to 1992) with Sekou Sundiata’s bands The Kou and Dadahdoodahda. Sekou was a friend and inspirational colleague and has remained one of Michael’s greatest artistic influences.  Michael recorded with Sekou and Dadahdoodahda on “Son Talkin’” from the Black Rock Coalition’s compilation album The History of Our Future (1990) and with Sekou as guest orator on “Signifyin’ Monkey/Watch What You Say” from Michael Hill’s Blues Mob’s Bloodlines (1994).  Since 2007 Michael has continued as a performer, songwriter, and producer in a variety of contexts while also working as an educator in a New York City public high school. In 2008, Michael began a productive working relationship with Bailey’s Café, holding songwriting workshops, subsequently composing the organization’s theme song and music for two of their theater pieces. Michael Hill’s Blues Mob released Goddesses & Gold Redux (JSP Records) in 2012 and continues to perform at clubs and festivals across the world.  Currently, Michael is a member of the cast for As Quiet As It’s Kept.

Your ticket for the: Michael Hill